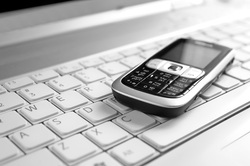 http://news.psu.edu/story
Despite what some critics, such as Sven Birkerts (1994, p.31), would believe, the arrival of the computer and digital age has not eroded print culture or cognitive capacity. If perusing the internet is any indication, there is not only a proliferation of written thought, but also evidence of a deeper and more robust intellect due to the ability for group and collective collaboration. With respect to the time period of 2000 to 2013, the shift initiated in the 1990’s has not only continued but started to take on a life of its own. A number of major innovations in technology have not only altered the physical appearance of the telephone, but altered a large portion of the population’s perception of this device. Where the earlier generations considered the telephone to basically be an oral device to communicate with others, the 21st century has shifted to a considerably different notion of the ‘phone’. No longer were the days of the telephone being physically attached to a residence or business, by wires. Now individuals could not only own their phones but also bring these devices with them, regardless of physical locality. The invention of the cell phone was taking on a life of its own and being embraced by society.

Although little advancements or changes had been made in the later years of the 1990’s and early 2000’s where regular home telephones were concerned, there had been countless advances in regards to cell phones. By 2000, up to a billion people world-wide used cellphones for gaming, internet and texting as well as talking (GreatAchievements.Org). During the 2000’s, changes were coming at an almost exponential speed and led to some key events which have continued to not only impacted society as a whole, but affected the business and education sectors heavily as well.  In this time period (2000 – 2013), the focus from wired and cordless phones for communication needs, switched to that of mobile devices and particularly, cellular phones.


See the video below for a chronological sample of different cellphones being used for texting between 2000 and 2013. 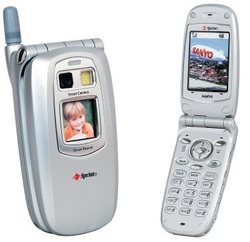 http://directorblue.blogspot.ca/2010/07/
2000 - 2003
Between 2000 and 2003, two of the biggest changes took place in the physical configuration of cell phones. The first cellphone with a full QWERTY (typewriter style) keyboard was available, and the first SmartPhones with touchscreen or LCD screens came to market. Smartphones are the transition between a phone/texting device and the computer. Although still in their infancy, Smartphones had the capacity to download and utilize software programs, more commonly known as applications or apps. Unlike telephone companies, cellphone companies were not just the makers of these devices but also controlled the programs that ran on their phones. Several models of cellphones included fully functional calendars, FM radio, Bluetooth, WAP and GPRS web browser capabilities and color screen options. This was also a time when the first camera phones were publicly available. Internal memory capacity was increasing to the point that music storage was possible along with more text and data storage. PalmOne and BlackBerry both introduce the first ‘merged’ phones which applied cellphone technology with PDA functionality. In 2003, Nokia introduced the first 3G “SmartPhone”, grandfather to our current devices utilizing 3G and 4G technologies.  (WebDesignDepot.com).

Many of the younger generation were embracing cellphones and Smartphones as they were beginning to see the huge advantages of sending a quick text to friends and family. However, due to most having the traditional phone style of keypad, language was becoming affected. Creating a text of any length took considerable time and it was easy to make mistakes. Users were beginning to shorten and abbreviate words in order to save time as well as space, as many cellphones were still bound by character count. Texting language carried not just to cellphone users, but to others as well. This caused an immense cause for concern to educators as they feared the erosion of proper language skills, both written and oral.


2004 - 2006
By 2004, Nokia’s “Smartphone” had already advanced and allowed for global signal roaming. This device incorporated the previous tools of other cellphones into a compact digital device and initiated some of the biggest changes to follow. Housing stronger cameras, the ability to allow for global roaming, and downloading of software programs, called applications or ‘apps’, set the stage for cellular mobile devices to become as powerful as laptops, in the near future. In a bid to enter this highly lucrative market, HTC Universal designed the first 3G pocket PC phone which incorporated Windows Mobile technology, setting the stage for a merging of computer and cellular phone capabilities. (WebDesignDepot.com).

This was also a time when society fully adopted cellular device concepts. As William Lesitaokana quotes from Rich Ling’s book, The Mobile Connection: The Cell Phone’s Impact on Society (2004), “the mobile phone is more than simply a technical innovation or social fad” (Lesitaokana, 2012, p327) it provided the ability to offer safety and security during emergencies, allowed children to phone or text their parent, and offered a sense of freedom from the physical constraints of a landline. (Lesitaokana, 2012).

However, along with the positive implications of these mobile devices, some negative implications were also evident. Ling goes on to say that it also allowed for increased criminal activity and terrorist networks to organize. Embracement of cellphones also created noticeable changes to occur on the younger generations. Social interactions between young adults were no longer being bound by landlines. They could easily connect with friends, create social networks and expand their social circle. Some were beginning to objectify their device, giving importance to texts, calls and other messages before attending to the interpersonal situation that they were in, giving an intruding feeling to others around. Cellphones were also becoming social status symbols, fashion accessories and a way to create a personal identity. Personal and social interactions as well as respectful mannerisms in the public domain were becoming strained, due to the invasive nature of constant accessibility. Many were finding it hard to ‘turn off’ or ‘put away’ their device in certain situations (Lesitaokana, 2012).

2007 - 2010
During the 2007 to 2010 time frame, Facebook launched its first cell phone app. The below is an account of this period imitating Facebook status updates via Smartphone (using a current version).

See this DropBox link for information on this time period.

Summary
Although the personal computer has proven to be a major ‘disruption’ factor to life as we knew it, the telephone, specifically cell phones, are already an inherent part of life and promise to become an even bigger society changer than PCs. Today’s cell phone is not only a talking device, but in most cases has the ability for considerably more functionality. Newer, current cell phones, often called Smartphones, are versatile and powerful enough to be considered the combination of many digital tools, including camera, video recorder, music player, sound mixer, library, research and information enhancer to access to the internet, notebook, and the list goes on. Each advancement in digital technology seems to bring about an equivalent advancement or use on cellular devices, to the point that technological savvy individuals have almost replaced their computers with their phones.

In the last several years, it has become increasingly apparent that the small, ‘candy bar sized tool’ called a cellphone, can actually have the capacity to enhance and even replace personal movable computers, such as laptops and tablets. More and more frequently cellphones are being implemented in everyday life to the point that many feel that they can’t effectively function in today’s society without their cell. With speedy advances in technology, the only constant is change... What was advanced yesterday will be behind tomorrow.

With all of the changes that we have seen in our lifetimes, and over history since the invention of the telephone, one can only imagine how the telephone will continue to change and impact our lives in the future. Can you venture a guess?