The 1990s was an important time in the development of telephone technology. From the introduction of more portable cell phones, to a shift from analog to digital technology, owning a cell phone became much more popular during this time period. The telephone went through major developments and with the increasing availability of the mobile web, cell phones began to become one of the most utilized technologies on the planet. Read on to learn about telephone development in the 1990s.
Photo Credit: http://en.wikipedia.org/wiki/Nokia

While the cell phone was invented in the 1970s, it wasn't until the 1990s that they became more practical in size, and thus began to gain popularity. Through the early 1990s, cell phones mainly functioned for business. However, this was also a time when cell phone companies began to market their products toward the general public. This was the beginning of a significant change in consumerism within the telephone industry.
Photo Credit: http://www.90s411.com/90s-technology.html
IMPACT:
The development of smaller cell phones was essential to their increased popularity and importance as the most utilized technological device of the last two decades. During the 1990s, mobile phone technology made huge improvements. This impacted the way that people communicate, participate in education, and use linguistics in everyday society. By the mid 1990s the cell phone became as small as practically possible. The keypad and display limited any more reduction in size (Farley, 2005). Furthermore, cell phones became increasingly popular as prices declined and became more affordable for public consumption. By the end of the 1990’s you could purchase a cell phone with 2G technology for about $200, including airtime service (www.thepeoplehistory.com/mobilephones.html). There was an important shift in the advertising industry as cell phone companies began to use television as a way to seek out new types of consumers. From encouraging the purchase of cellphones for business to introducing them as everyday tools made for the general public. Companies began targeting families and motorists as seen in this advertisement from the 1990s:
Video Credit: Smith, 2006
Companies were able to encourage the consumption of cell phones as practical devices for drivers, in case of emergency, for families, to communicate easily, and business people, for work purposes. While it was not until the early 2000s that the use of cell phones became more popular for young people as social communication devices, this decade was the beginning of a change in thinking. As other technologies allowed people to travel faster and further, audio communication also evolved to become more important than ever. While the landline was still the easiest way to reach someone, car phones became more common and the trend eventually evolved to public consumption of cell phones. At this time cell phones were not as crucial to education or language use, but North American society was beginning to jump on board with the idea of easy and affordable social communication.

In 1991, The Telephone Consumer Protection Act was passed (in the United States) which restricted telemarketing by automatic dialing systems and pre-recordings.

The world's first GSM (Global System for Mobile communications) phone call was made. The original telephone system (known as 1G) was analog, and used digital signaling to connect radio towers to the rest of the telephone system.

Second generation 2G cellular telecom networks were commercially launched on the GSM. The major benefits of 2G networks were that phone conversations were digitally encrypted. 2G systems were much more efficient in allowing for better cell phone service. Furthermore, 2G introduced data services for cell phones, starting with SMS text messages. Radio signals on 2G networks changed to digital, and like 1G systems, use digital signaling to connect the radio towers (which listen to the handsets) to the rest of the telephone system (http://www.historyofinformation.com/index.php?category=Telephone).
IMPACT:
The creation of 2G cellular systems was an important improvement in telephone technology in the 1990s. The design of GSM service is somewhat complex because it must be able to locate a moving phone anywhere in the world, and accommodate the small battery capacity, limited input/output capabilities, and weak radio transmitters on mobile devices (www.wikipedia.org). While previously, cell phone technology was slow and inefficient, the demand now existed for GSM to tackle the growing number of customers on mobile networks (Farley, 2005). GSM became the global standard for mobile communication, with over 80% of cell phone users relying on the network by the end of the 1990s. In 1995, fax, data and SMS messaging services became available, and GSM subscribers exceeded 10 million people worldwide. Pre-paid GSM SIM cards were launched in 1996 and the number of GSM subscribers surpassed 100 million by 1998 (www.wikipedia.org). With an increase of 90 million users in only three years, GSM networks continued to thrive. The increase in users on a GSM network indicates just how quickly mobile phone technology began to impact the world in the 1990s. These networks allowed people to be globally connected to resources, news, and their social communities more than ever. The cell phone became an everyday tool and the number of subscribers increased from just over five million in 1990, to one hundred and nine million in 2000 (www.infoplease.com). The amount of users would only increase as companies developed more user friendly cell phones. As people had access to more information, they became empowered. New types of social communities developed. By the mid 1990s, networks were strong and talk with 'voice,' was as good as it needed to be. Data became the next sought after addition. While, talk remained the essential service for mobile phones, developing better and faster data networks over cellular radio became priority for system desginers (www.privateline.com).

Neil Papworth sent the first commercial SMS text message using a computer. The message said, “Merry Christmas” and was sent to Richard Jarvis who received it on his on his mobile phone. Jarvis was not able to reply because there was no way to send a text from a phone at the time.
Photo Credit: http://www.digitaltrends.com/mobile/how-to-send-free-text-messages-online/ 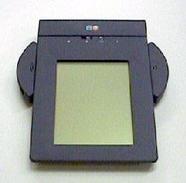 AT&T introduced the AT&T EO Personal Communicator, which was the first tablet computer with wireless connectivity via a cellular phone. The device provided wireless voice, email, and fax communication, but failed to make enough revenue and  shutdown in July, 1994. Two models, the Communicator 440 and 880 were produced and about the size of a small clipboard. The device came with a wireless cellular network modem, a built-in microphone with speaker and a free subscription to AT&T EasyLink Mail for both fax and e-mail messages (www.historyofinformation.com). The tablet was possibly too advanced for the public market in the 1990s. Interestingly enough, it's looks and capabilities closely resemble today's favorite technological device- the iPad.
Photo Credit: http://en.wikipedia.org/wiki/EO_Personal_Communicator

The first access to the mobile web was commercially offered on the Nokia Communicator 9000 phone. It was the first mobile phone and handheld computer.
Photo Credit: http://www.pinkjooz.com/index.php/10-nokia-phones-that-left-their-impressions-forever/

IMPACT:
Access to the mobile web was a major improvement for cell phones in the 1990s.  With 2G (digital cellular networks), came the ability to access media content and the World Wide Web on cell phones. The Nokia Communicator 9000 was the first cell phone that could check email and access the internet. However, it’s abilities were limited because at the time cellular networks were optimized for voice rather than data use (Farley, 2005). In 1998, the first downloadable media (ringtones) became available on cell phones. Other media such as news, horoscopes, jokes, video games, and advertising appeared soon after. As the use of 2G became more widespread, and people began to use cell phones in their daily activities, the demand for data on cell phones (internet service) increased. While 2G service was much faster than the previous analog system, it was not effective for mobile internet service, which was becoming increasingly popular through the 1990’s. The need for a more advanced technology was evident if the industry was to meet the demands of the public (www.wikipedia.org).

The 1990s continued to be a period of change, as cell phones became increasingly recognized as valuable technological devices. The widespread availability of the mobile web on cell phones made it possible for people to gain information more efficiently and communicate in ways that were previously not possible. The first full internet service became available in 1999, beginning in Japan, and this is when The Digital Revolution really took off. Technology, such as access to the mobile web on cell phones, revolutionized developed societies (www.wikipedia.org) and led to increased communities of people, resources, and tools for social networking. With the introduction of browsers like Netscape, internet use continued to thrive from 1995-2000 (Farley, 2005).

Wireless Application Protocol, known as WAP was established. This was a secure specification that allowed users to access information via handheld wireless devices.

Full internet service was offered on the mobile web for the  first time, with the first mobile-specific created web browser (www.historyofinformation.com).

The 1990s was an important decade for improved mobile phone technology. In 1990, the first cell phone call was made using the new digital technology which was faster and more reliable than ever. The new technology also made cell phones capable of being smaller rather than the large and less portable cell phones from the 1980s. Smaller batteries made the phones more energy efficient, which contributed to their smaller sizes and popularity. Prices also became more affordable than they were in the 1980s. SMS messaging was born and became a more affordable and sometimes free option for consumers. Cell phones continued to gain popularity throughout the century, and SMS messaging created a new way for people to communicate easily regardless of time or location. In this decade, the cell phone industry was beginning to take off. While the social, educational, lingustic, and cultural impacts were not as asstounding as they were in the later centuries, it is important to note that the creation of more efficient technology was the beginning of the movement toward the development of our current forms of social communication, language, and education (www.thepeoplehistory.com/mobilephones).